Posted on May 9, 2015 by jasminatesanovic 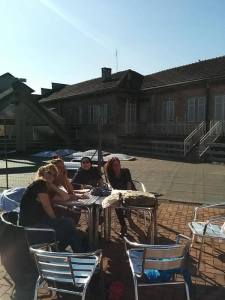 Does anything feminine ever exist as such? A history of invisibility cannot guarantee material results.

We know they existed historically, these creative women who worked with along with male artists and designers, but they rarely had their names attached to their work.  They were a special caste, the mothers sisters wives of famous, rich and publicly visible creative men.

Sometimes we dare to say about design:  now, this is a feminine touch. But what is a “feminine touch,” who can give it, who can do it, how do we even know we’ve seen it?  It is hard to see a “woman’s touch” in design, or art, or science, and even a lifelong feminist can take design entirely for granted, and drive the car without ever looking under the hood.

We do not want to be trapped in essentialism and mainstream biological determinism, so can an “Internet of Women Things” even exist?  Why not try it and find out?  It’s no use getting stuck in theoretical and philosophical issues for a system of things that has never existed before, or that nobody has yet defined, or that is defined, but badly.

So, we decided to ask women designers, women programmers, women artists, women who are interested  in collaborating with Casa Jasmina, what they would like to do there, as women.  What are their ideas, their clues?

I don’t claim to personify all women, or gay men or gay women for that matter, but I do find that when I interact with Internet-of-Things stuff, in Casa Jasmina especially, I have a  distinct  point of view, different than most male colleagues.  I don’t experiment and tinker for its own sake, in fact I am rather demanding.  I have enough demands for a small manifesto.

I demand purpose from the designed IoT object: does it really substitute in some better way for existent models, things we already have in the world?

I demand a friendly, if not beautiful, appearance.

I demand it as open source, meaning also fair in price  and clean in its origins and destinations.

I demand to be allowed a personal approach to my objects. My things, which share my space in the world, have meaning for me.  They create an emotional relationship through their shapes, their colors, the memories they inspire.

Once I put, or find, an object into its proper place,  I never want to move it:  once it is placed just right, it feels radically connected, rooted by habit to the earth.  I do know that connected objects on a network can be freer than before, that they can roam around logistically like wireless birds or random toddlers.   But I sense that things in a home can and should have an ideal place, a pedestal, a limelight, a pondered and considered quality which suits me, and those who use the space with me.   I don’t want things torn from their source in the life of the home, the core of their universe.

No users but people, no geeks but persons: and the ideal categories of our homely concern should be the elderly and children.  That first category, we ourselves are all becoming someday.  The elderly need help in our world, where youth is becoming rare and care is hard to buy.  The second category are the young in the home, the innocents entering our polluted planet with its wreck of an old economic system.  What experiences will children have in an Internet-of-Things home?

I notice, among the women with whom I talked about these things, that the goal that matters to them is the redesign of life, not the re-design of things.  Nowadays the word “design” can stand for all sorts of things, from the design of crime to design of stardom. Designers are the stars of the present uncertain societies where old categories of work have ceased to exist: we are ill-unemployed, endlessly reinventing our jobs and our means of survival, and our struggles seem mostly invisible, except for the lucky few. The stars!

Maybe it’s for the best, maybe we are all like women today, in our obscure struggles.  When I think of how, by chance, I somehow became a designer of my Casa Jasmina habitat, it’s like a Cinderella fairy tale.

In Serbia, my native country, we went though international sanctions.   The Balkan wars changed daily life drastically for women, because war and sanctions deprived us of goods, of high technology, and also of men who were drafted or in hiding.

A long, sad tale, but we women had to get by somehow, in a completely unknown alien and hard situation for most of us, spoiled city girls used to urban convenience, women had never dreamed that a modern city of  three million like Belgrade could become a war zone.   Bitter war was our grandmother’s story, and besides, these new economic wars didn’t resemble the old black and white conflicts, with clear allies and enemies, swift life and death. We felt that we were our own worst enemies, and life ground on day by day as a slow death.

We had to reinvent our daily life so as to feed the children, care for the elderly, to heat the blacked-out homes which became like caves after every sunset.  But I learned about those Maker-style design issues, and now I know about them. I learned not just to change the bulb but fix a broken fuse. I learned that the soap powder for washing machines is mostly useful for polluting rivers, that we take too many medicines too carelessly, that we waste household water and we overheat our homes.  I learned that children need affection more than they need cash. I learned that old people do not need to rest but to be useful and needed in their own way.

I learned that culture is not only from books but about writing down your own experience. In short, I learned how to hack my disordered life. And of course I lived on the Internet, my virtual life was my best guarantee of my physical life.

This is how I became an eventual fan of the Internet of Things, of all connected design. I don’t yet know how to make it happen, but I do know how it has to look.

As Donna Haraway used to say, “Women gather around affinities not identities,” and that’s how imagine an “Internet of Women Things.”   Elective affinities.

So, welcome, women, to Casa Jasmina: welcome to Casa Jasmina as your safe place for thinking different, for thinking from scratch, from wherever you are and think you wanna go, from Cinderella’s cinder ashes to the palace of Nefertiti.  We will fail and fail, often and well. But we will get somewhere: after all this historical period is a   transition to nowhere, so better have fun while traveling!

Jasmina Tešanović (Serbian: Јасмина Тешановић) (born March 7, 1954) is a feminist, political activist (Women in Black, Code Pink), translator, publisher and filmmaker. She was one of the organizers of the first Feminist conference in Eastern Europe "Drug-ca Zena" in 1978, in Belgrade. With Slavica Stojanovic, she ran the first feminist publishing house in the Balkans "Feminist 94" for 10 years. She is the author of Diary of a Political Idiot, a war diary written during the 1999 Kosovo War and widely distributed on the Internet. Ever since then she has been publishing all her work, diaries, stories and films on blogs and other Internet media.
View all posts by jasminatesanovic →
This entry was posted in Uncategorized and tagged Arduino, CasaJasmina, Internet of Women Things, IoT, Torino. Bookmark the permalink.

3 Responses to Internet of Women Things@CasaJasmina